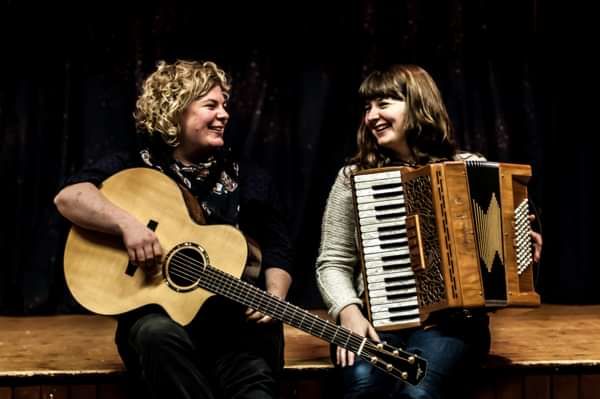 PLEASE NOTE THIS SHOW IS AT THE GLAD CAFE, ALL TICKETS REMAIN VALID

Having played alongside each other for over ten years, they revel in an intuitive approach to each other’s musical ideas and interpretations, and an “almost telepathic communication” on stage (Hi-Arts), effortlessly showcasing the fruits of duo partnership to the highest level, creating “music more than the sum of just two parts” (The Scotsman).

Mairearad and Anna both grew up in the Scottish Highlands amidst very similar musical backgrounds (most notably, mandolin playing Dads!), and so share an innate understanding of Scottish culture and music. As a duo they have enjoyed many successes, including five stars in The Scotsman and high praise from KT Tunstall, becoming a much-loved live act.

Their three albums – 2009’s eponymous debut, ‘Doubling’ in 2013 and ‘Best Day’ 2015 – have met wide critical acclaim, Mairearad and Anna was recorded live, just the two musicians – the live double act – whilst Doubling features many layered tracks, building a more complex sound, though still just from the two musicians. At the heart of Doubling remains the live duo sets, intricately arranged and executed with symbiotic sympathy, enhancing their “must-see” reputation.

The concept for the duo’s fourth album (realesed 31 st August 2018) called ‘Farran’ which is the Scots word for the starboard side of a boat, is to represent exactly what this virtuosic duo perform live. It is the stripped back sound of vocals, guitar, accordion, fiddle and bagpipes and it was recorded live at Gloworm studio in Glasgow with co-producer, Calum MacCrimmon from the band, ‘Breabach’. The material includes the JP Cormier song about a boat, ‘Molly May’ and a haunting fiddle number ‘Mo Chailin- Dileas Donn’ written by Ullapool fisherman, Hector Mackenzie. Also on the album, there’s a foot stomping set of local reels written by Mairearad’s piping teacher, PM Norman Gillies, and many other great tunes, notably, some self penned compositions which is a staple for this pair’s music. Both award-winners, Mairearad currently performs with King Creosote and Mike Vass and Anna with Blazin’Fiddles and Rant. They have also previously performed with a number of well-known bands and artists; The Poozies, Bella Hardy, Box Club, Kate Rusby, Karine Polwart, Karen Matheson, Capercaillie and together in Scotland’s one and only Celtic Big Band, The Unusual Suspects.

“…the camaraderie and sheer fun of musical collaboration is plainly evident and infectious.” Songlines

“The young Scottish duo of accordionist Mairearad Green and Anna Massie, on guitar and banjo…in sparkling style, performed largely original material with frequent playfulness of delivery… belying their formidable technical prowess, in music that seemed much more than the sum of just two parts” ***** (FIVE STARS) The Scotsman

“Anna Massie on guitar, fiddle and banjo, Mairearad Green on accordion and smallpipes – adds up to a wide palette of permutations, most of which featured in this relaxed, highly enjoyable performance…shifting the lead/accompanist balance, swapping and sharing the melody, harmony, chords and rhythms with deceptive fluency.” The Scotsman

“Farran is rooted in an elegant sense of ship-shape simplicity, with not a single note out of place and each tune as uncluttered, clean, fresh and invigorating as a salt wind out to sea or the cold spray from a boat’s prow.” Folk Radio UK

“Recorded live, the album captures the intimacy and sheer quality of the duo’s playing” **** 4 stars Songlines

“This is another gem from Mairearad and Anna” Shire Folk

“The entire album is a showcase of musical skill and dexterity, demonstrating what a full sound an acoustic instrumental duo can make.” Paul Matheson