The Shee - 'The Shadows' Tour 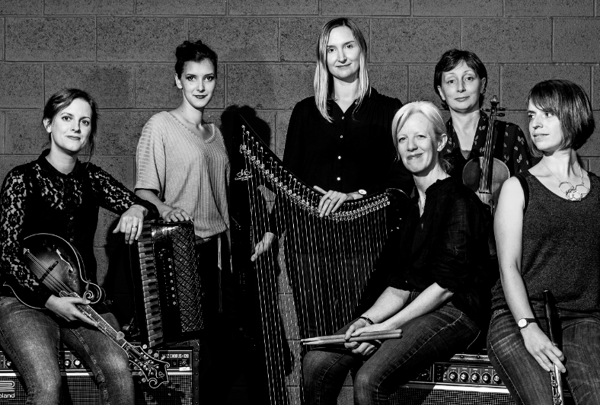 MOVED FROM THE BLUE ARROW

Cross-Border folk multi-instrumentalists and festival favourites, The Shee, met on the Folk and Traditional Music Degree course at Newcastle University in 2006.

The Shee are an exceptional all-female band boasting powerful and emotional vocal performances and instrumental prowess. Featuring the talents of BBC Radio 2 Folk Musician of the Year 2017, Rachel Newton on Harp, Sting's clogger of choice, Amy Thatcher, on Accordion For ‘The Shadows’ Tour in Spring 2020 The Shee will be joined by a new member; Scottish-Icelandic percussionist Signy Jakobsdottir, adding a fesh approach to the band’s huge catalogue of material.

Following three albums (A Different Season, Decadence & Murmurations) and a hectic touring schedule over the past decade, the six members of the band each commissioned a Folk Music hero and in some cases mentor, to write an original piece of music for their fourth album Continuum to celebrate their tenth anniversary as a band.

Premiered at their sell out concert at Celtic Connections and toured around the UK and at Summer festivals throughout 2016 - 2019, the album has received great audience and press acclaim.

The Shee are now working on material for their new album, which will feature an adventurous brew of Folk, Gaelic and Bluegrass music. Expect slow airs, Gaelic ballads, original songs, high energy tunes, hypnotic riffs, and, of course...clog dancing!

The Shee - 'The Shadows' Tour