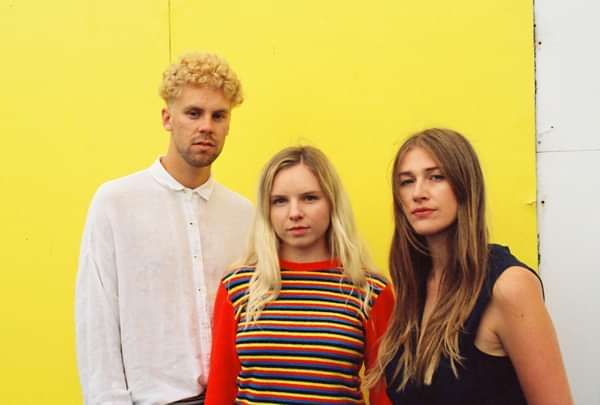 The earliest sketches of Wellington trio Mermaidens, follows the story arch of how most bands start; through long-term friendship and bonding over music that shaped their salad days. For Mermaidens, it was an eclectic melting pot of PJ Harvey, Warpaint and Fugazi to name a few.

Together, childhood friends Gussie Larkin (guitar/vocals), Lily West (bass/vocals) and Abe Hollingsworth (drums) form a powerful trinity of unwavering creativity and relentless work ethic. Their time together as Mermaidens has been a fruitful one; a timeline consisting of two critically acclaimed albums, being signed to iconic indie label Flying Nun Records, and a wide range of live supports that include Sleater Kinney, Death Cab for Cutie, Lorde, Mac DeMarco and The Veils.

The internationally acclaimed Perfect Body (which drew a 2018 Taite Music Prize nomination) saw their circle of influence expand to a new, global audience. With its progressive and cinematic stylings on angular post-punk and grunge, Gold Flake Paint said the record “should prove to be one of the summer’s most brilliant long-players," while long-time music critic Graham Reid of Elsewhere confirmed it as “a real listening experience.” Clash Magazine praised the record for its “Noisy, scratchy, enigmatic songwriting.” But perhaps it was God Is In The TV that explained the commanding presence of the record best by saying “I can quite believe that some of their tracks have mystical properties.” Come 2019 and the trio are set to release a body of new work. The first split single 7” You Maintain the Stain/Cut It Open is out April 5th on Flying Nun Records. The band are in a new space. We are in darker, more confrontingly uncomfortable territory.

Recorded at Blue Barn Recording Studio with long-time collaborator James Goldsmith (Perfect Body, Undergrowth), the trio’s new material was tracked in January 2018 before Larkin toured overseas with her heavy psych rock side project, Earth Tongue (with Ezra Simons). “It was a short recording process with close deadlines - a lot of the lyrics and guitar lines were put down in the studio or the night before. At the time it was difficult, but you forget about that. We like to churn things out,” says Larkin reflecting over the sessions.

The first track to leap from the band’s “new world” is the West-penned song, ‘You Maintain the Stain’; a stern letter to “The Man” that resembles a big, subtle middle finger to the gender-based power structures in the world. It is a pent up frustration with the long-crumbled patriarchal systems upheld by the wrong people, with all of the power. The stain refers to the deep-seeded microaggressions that so many experience. The stain is all that is bad. “It's about being assertive and having attitude - thus defying gendered expectations that women should handle situations in a calm, kind way.” explains West.

Blow by deathly blow, “The Man” gets dragged through a hot sludge of heavy bass-filled corridors, overcut by Larkin’s angular, off-kilter guitar lines - a topical gnawing of teeth fresh from the kill. “You won’t look me in the eye, you’re afraid I see you. You can’t hide. Your things cast a light... I see through you, I see right through...” sings West in a cold, certain voice over a series of hard hitting sonic bludgeons, emphasized by Hollingsworth’s dynamic work on the kit. This is Mermaidens louder, more crushing and propulsive than ever. They are in their element, and at their most raw and confronting. “We’re getting braver. We’ve always had this visceral, graphic imagery in our heads, using the ocean and more gentle natural metaphors, but maybe we’re getting more confrontational,” says West. “There are themes of breaking, falling apart and coming back together.”

B side track, ‘Cut It Open’ is a modal, lethargic ode to getting rid of the bad. It is a fitting follow up to the A side track. There is a sweet dissonance that comes across in Larkin’s modal melody and mimicked guitar line, which is guided by the wandering vocal part.

‘You Maintain the Stain’ and ‘Cut It Open’ set a strong tone for what is to come. Mermaidens are in new terrain; exploring power and control in a confronting lens. They’re looking at the gatekeepers and dominators of the world, dissecting their power one song at a time.